For us, on the face of it, LinkedIn ads actually gives us lower CPA’s (Cost Per Acquisition) than some of the bigger players such as AdWords but there are a few “quirks” to the LinkedIn ad system that as a smaller advertiser you may find incredibly frustrating.

It really is, where else can I target decision makers in the niche I’m aiming for with this level of accuracy? As LinkedIn’s own pitch says: Precision B2B targeting.

And it is precise: Job Title, Company Size, Seniority, all can be targeted with an ad specific to those you want to target. 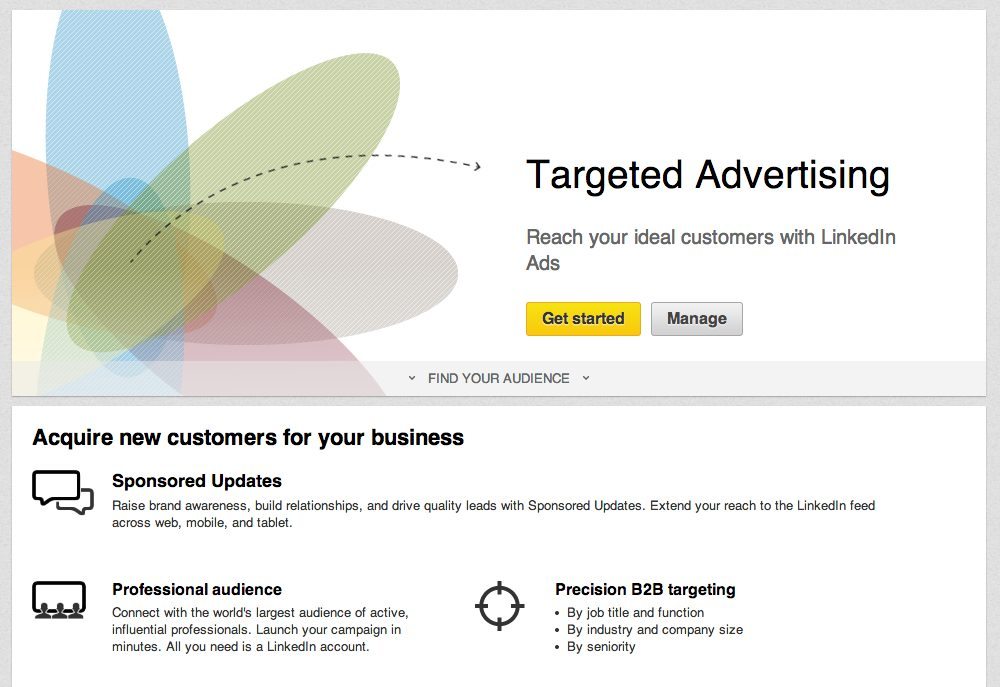 It’s a shame the ad system is primitive

So I’ll explain this briefly with the help of an example campaign I created for the purposes of this blog.

I created a campaign that targeted our target market: Company size 1-200 employees at Management / Director level in the Marketing / Business Development Job Function.

That’s 25,836 members on LinkedIn as of today. GREAT! As LinkedIn promises, the targeting is very precise.

I then created a few ads with varying copy to see what resonates best with our target audience. I selected a bid (how much I want to pay per click) of slap bang middle of the suggested range as a starting point, gave it a $50 per day budget and opted in to the LinkedIn lead system (which means anyone clicking the ads can hit a button to request contact from me on LinkedIn). As I do with any PPC advertising I hit go and left it for a couple of days to settle down and this was the result:

What on earth happened?!

Ad impressions peaked at 70,000 and then evaporated into nothing to the point our ads are hardly served meaning we’re getting no traffic / leads.

After logging in and looking at the data, I can see one advert performed very well with a 0.357% CTR and received a lead (using the LinkedIn lead system) on day one giving a CPA of $16 (overall) and several other ads were well over LinkedIns 0.025% benchmark (This is explained below).

So I thought I’d contact linkedIn and ask them for some help and here is their reply:

New Ads start out without any click-through rate (CTR) history. The CTR – how often people click on your Ad after seeing it – is a good indicator of how attractive and relevant your Ad is to your target audience. We give all new ads an average expected CTR and start serving impressions using that default value until we learn what the true CTR is (based on your campaigns performance). Many times, your true CTR is lower than the default and that’s why you see your impression volumes drop after a few days.

The two factors that determine how often your ads are shown (and how strong your campaigns will perform) are 1) your CPC bids, and 2) the performance history of the campaign(s), relative to other advertisers’ campaigns. The performance history of a campaign can be measured/assessed by the CTR (click-thru-rate) of all Active ads in that campaign. Our benchmark for a ‘healthy’ CTR is .025%. So when you launch campaigns, you will want to try and achieve this. The higher the CTR, the more users in your target audience are finding your ad to be relevant and appealing to them.

You’ve seen a significant drop-off in performance/ad impressions, which is an indication that your campaign isn’t as targeted as it can be. Here are some suggestions to help improve performance of your campaign:

Create a new campaigns based on the ones you currently have to refresh the CTR.

Have 3-4 ad variations within each campaign. Change up the image with the ad variations and create a very strong call to action. It’s often hard to predict what messages will resonate with your target audience. That’s why it’s important to create at least 3 different Ad variations in each campaign. By default, we’ll display all of your Ads and show the highest-performing ones more often. You’ll likely find an Ad variation that outperforms the others.

Call out your target audience in the headline or text of the ad. By doing so, it will grab their attention and hopefully lead to more clicks.

Increase your bid up to 30% higher than the suggested range. Your bid is competing with other advertisers who are targeting a similar audience. By increasing your bid, it will be more competitive in the auction and will likely receive more impressions and clicks.

Brett, I hope you will find this information clear and helpful. If you have further questions, please feel free to reply to this message.

In Summary LinkedIn tells me:

They give ads an “Expected CTR” of 0.025% if your ad CTR falls below this it won’t show as often.

The drop off in my campaign is an indication it’s not as targeted as it could be.

Create a new campaign to “Refresh” the CTR

What? Really? So every 2 days I have to create a new campaign? Seems rather labour intensive: what if I had 200 ads? That is a very primitive approach.

Have 3-4 Ad Variations with a Call to Action

I had 5 ad variations all with calls to action, thank you very much!

Whooaaaaa! Hold up! Remember your initial pitch? ” Precise B2B Targeting”. We’re getting somewhat less “precise” now. Add to that I’m now incredibly confused when above you’ve told me to target my audience better and then you tell me to essentially broaden my campaign to target up to 400,000 people: How is that precise? I only want to target my target market, I’m not interested in the other 370,000 people you are suggesting!

It seems slightly odd that given the ability LinkedIn has to “laser target” my demographic market I have to carpet bomb the ad system to have my ads run for more than 2 days!

I can fix this by essentially ‘Trying again’: Duplicating the campaign, waiting for approval and re-running it as LinkedIn recommends but this seems awfully long winded. Yes, we could do this, up our bid prices and get the thing rolling and of course, as a marketing agency we know this but what if you’re not a marketing agency?

LinkedIn’s self serve ad platform appears to be very intuitive and it is, however for ongoing optimisation for the un-initiated it’s clunky and potentially confusing: What’s the point of a suggested range of bid prices if you need to bid 30% higher? How could a business owner ever know this? Furthermore, what’s the point of “Precise B2B targeting” when you have to very un-precisely target up to 400,000 members (irrespective of the size of your target market) just to get your ads to run every day?

Furthermore, if it’s possible to get great performance by just duplicating a campaign and starting again then what’s stopping advertisers cheating their way to the top with potentially awful adverts whilst good advertisers see a drop off in CTR resulting in their ads hardly showing?

Overall, if you’re a novice advertiser, be prepared to encounter some frustration with LinkedIn Ads. Yes it has potential and yes it’s actually a very good system but it has some major flaws that will undoubtedly cause many to grow frustrated and simply not bother.

Blogging – How it helps your SEO and your brand

6 PPC Mistakes That Will Cost Your Campaign Money

Why PPC is Great For All Of Your Marketing Goals.