A while ago I wrote a blog titled “Why main keywords do not exist” showing that although you may THINK you need to rank for a handful of your main keywords, it was a strategy likely to harm you in the long run. I thought it was time to do a follow up blog in light of a few questions asked as a result of that blog (and also by my own clients.).

I think it’s pretty fair to say all webmasters at some point have said: ” Ranking for [insert any keyword here] would seriously improve my traffic / sales” I’ve certainly heard this thousands of times so to answer that question definitively here’s why it’s a bad idea:

OK, so I’m going to use an example to make this easy and clear, lets say we’re an e-commerce website selling mens clothes and for the purpose of this blog we’re going to concentrate on “Mens T Shirts”.

I want to rank for “Mens T Shirts”

This is the obvious term, you want to sell more mens t-shirts, we should rank number 1 for “Mens t shirts”.

This is when it goes wrong.

So you go through your site “optimising” for this term, you must have your mens t-shirt category ranking number 1 for that term at all costs. What happens here, more often than not is that this area of the site becomes so “pigeon holed” for that term that it doesn’t rank for much else. Fast forward a few months (or even years), the site starts to rank for this term somewhere in or near the top 10 and the website owner becomes disappointed that actually, there’s not been the significant change in traffic or sales that they expected.

Here is exactly why (stay with me here!):

Let’s say you reach number 1 for “Mens T Shirts” and optimistically predict you’re getting 40% of that traffic so 3240 visitors from that term.

Now, have a think about what mens t shirts you actually sell? Do you sell polos? Do you sell funny mens t-shirts?

It’s probably unlikely you sell every type of mens t-shirt so lets assume 50% of that traffic bounces because although they’re thinking they want a “Red Ralph Lauren Polo Shirt” they just searched for Mens T Shirts and now have gone back to refine that search.

This now leaves us with 1620 visitors. Say your conversion rate is a reasonable 5%, that’s 81 orders on average per month from that term.

OK, so these percentages are assumptions, but they’re optimistic assumptions. Now consider that you’ve spent 50% of your SEO budget for a year to target this term and this traffic. You’re paying say £3000 per month for SEO so those additional 81 T Shirt orders are costing you £18.50 each JUST for SEO. In other words a cost per conversion of £18.50. Add your costs to this and unless you’re selling very high end products you’re probably not making a great margin if at all.

That’s why concentrating on a handful of vanity keywords is not sensible. Yes, I’ve made a few assumptions but this is typical of the many situations I’ve seen where this is happening.

So what should you do?

Let’s go back to that other statistic, over 510,000 searches for terms that are associated with the term “Mens T Shirts” Here are some examples (I’ve used the Google AdWords Keyword Planner for the search volumes): 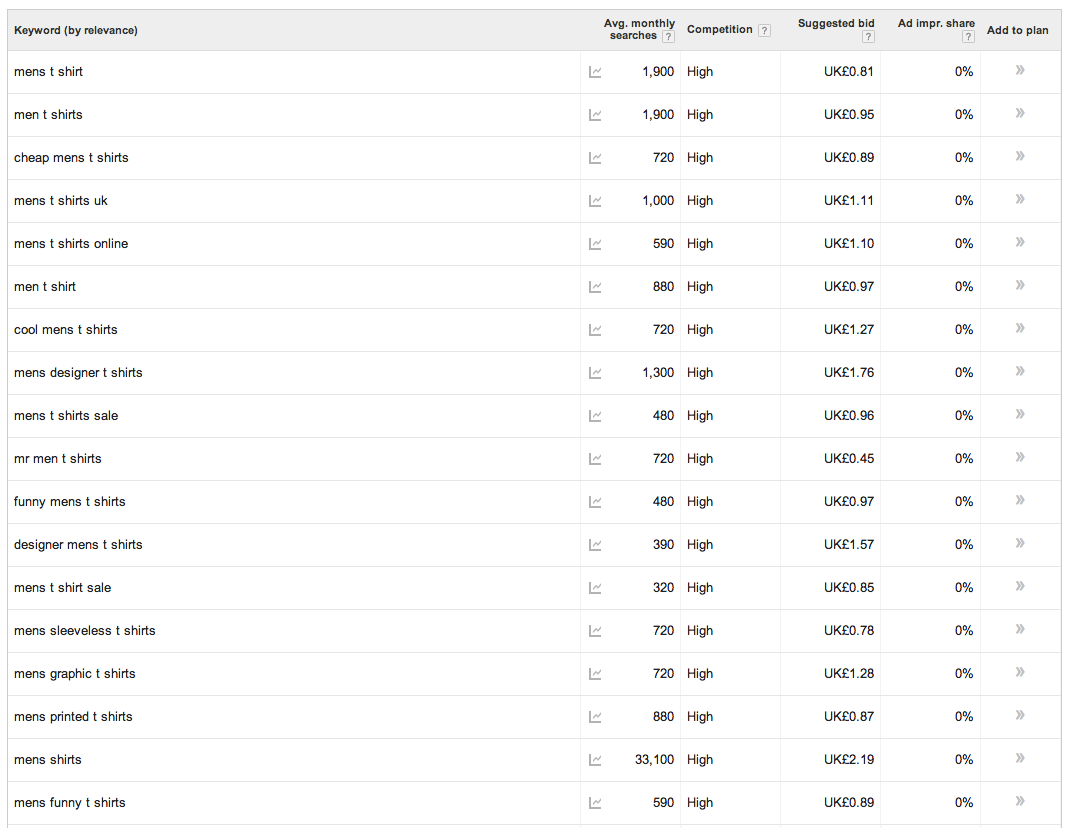 Now, if you’d have optimised your content considering the sheer number of other relevant terms are potentially exposing your site to 510,000 visitors rather than 8000. In simple terms:

The search term “Mens T Shirts” represents just 1.56% of the total search volume for this and similar terms listed above. By just focusing on this one term you’re putting 100% of your SEO budget into 1.56% of your potential traffic.

If you ranked in position 5 for those 510,000 searches and lets say you won 10% of the traffic that’s 51,000 average searches per month to your site. Considering many (most) of these terms are long tail and more relevant you’ll see a much smaller drop off. So lets say we lose 20% of that to be conservative so we’re left with 40,800 searches per month. Given our 5% conversion rate that’s an additional 2040 orders for the same SEO spend (Potentially).

So ultimately, with those assumptions in place (The actual numbers don’t really matter, it’s all relative).

Which of the above would you REALLY want?

Using SEMRush, we can get a relative idea of how a given site is performing for a given keyword. In this example we can see that SEMRush estimates ASOS gets something like 100,000 visitors per day and the term “Mens T Shirts” represents 0.04% of the total traffic (Highlighted in yellow). 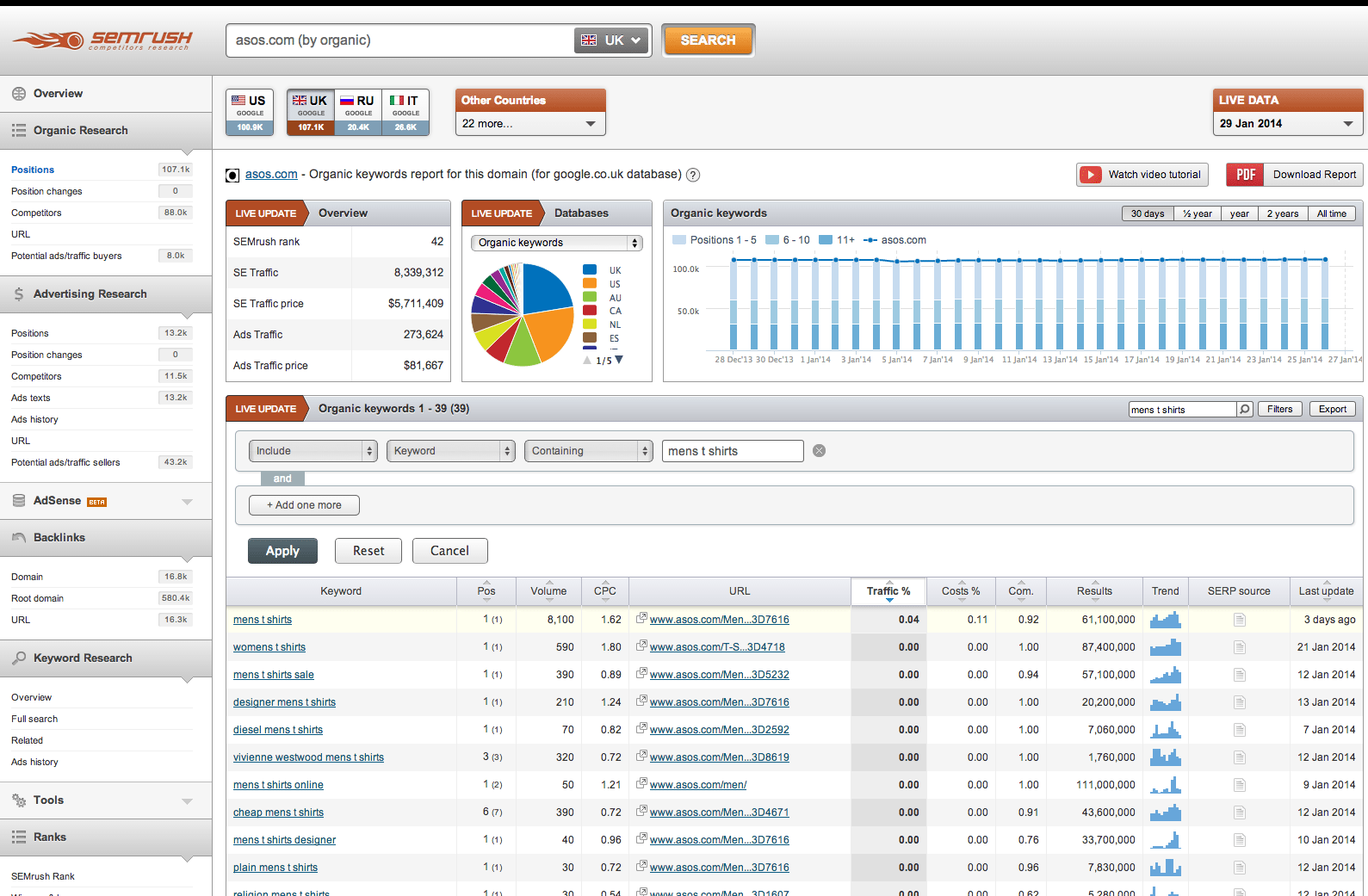 If ASOS were only concentrating on this term then of course it would be responsible for a much higher proportion of traffic, but instead they have over 100,000 terms (known by SEMRush) producing the site in search which in aggregate equal considerably more traffic and ultimately sales.

What you can do however is look at Google Webmaster Tools and get a feel for what type of terms are resulting in a given page being found in search. You can also see roughly how many terms are sending traffic so you can see the expansion of terms too.

In addition, longer tail terms (Terms such as those in the screenshot above) tend to convert better as they are more specific in nature which often means the searcher knows what they want and is ready to by. Consider your conversion rate, is it up? If it is, it’s a possibility longer tail more specific searches are driving buyers to your site.

Forget about ranking for that handful of super competitive obvious keywords. A smart SEO will take an approach that ensures your site ranks for thousands of variations of keywords that in aggregate equal more searches and actually increases your sales and cost effectiveness of your SEO campaign.

Google Updates IF Functions For Adwords

Increase Your Profits in 2014