Facebook have announced that they are now testing a new ad placement, this time using its own Messenger user interface. Facebook announced that this is a “very small test” being completed in Australia and Thailand, this will allow businesses to place an ad on the messenger home screen, these will be in a prominent card-style ad including thumbnails accompanied by text and a link.

These new card-style ads will appear below your recent conversations in a banner style very similar to what we see in our Facebook news feeds, the link on the ad will be customizable with the different call to actions just like the buttons on Facebook business pages. The ads currently take up a fair amount of space on the messenger home screen, and they are positioned between the active now and favourites section.

The initial feedback on the current design in testing is that the ads seem to make the messenger home screen very cluttered and potentially less friendly, but Facebook has announced that ads will not appear in conversations unless the user chooses to start a chat with the brand. 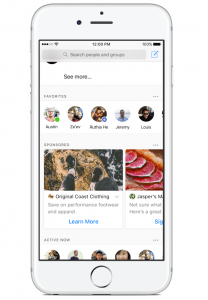 The Right Move For Business Advertising?

Facebook’s Eddie Zhang made an announcement regarding the test, “Businesses have long been telling us that they are very excited about the potential of the Messenger platform to reach their customers and help them to drive sales, build brand awareness and increase customer satisfaction,”

This is a positive step forward for business advertising but is currently undergoing scepticism by its users. Messenger currently has over a billion monthly users, which could be reached through ads of this style. Facebook has also said that 1 billion messages are sent to brands per month, and it is rumoured that Facebook is using this style of data to assume a demand for this style advertising is desired.

Consumers are using messenger to communicate with businesses as it’s a more efficient way of asking questions or getting customer service related information, but does this mean they want their favourite messaging app cluttered with business ads?

With all points taken into account, it is important to remember that this style of advertising is only in testing and is currently only with a small number of people, but this is not the first time that we have seen Facebook release plans for advertising within the messenger app.

Keep an eye out on your messenger home screen in the coming months!