It is well known that Facebook is in search of Social domination, but does this mean taking down Linkedin? Well, Facebook has introduced a new tab to their business pages which are labelled “Jobs”, giving businesses the ability to advertise their positions directly on their page just like LinkedIn.

Facebook are only in the experimental stage at the moment, but with the introduction of the jobs feature, it is only giving businesses another reason to put more of its marketing efforts into drawing people to their Facebook Page. Facebook was questioned about the introduction of the new feature and confirmed that they have been reviewing many small businesses Pages and have seen a large quantity of companies posting their job vacancies, so Facebook has taken the decision to introduce the Jobs tab. 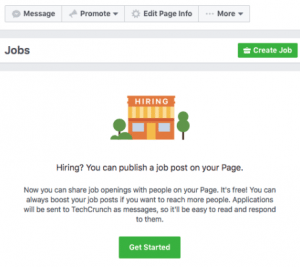 Facebook will also be giving businesses the luxury of letting you pay for promoting your job vacancies just as they do for Page promotions, this will directly compete with LinkedIn’s ad service, the new feature could not only rattle LinkedIn’s waters but the likes of Workable, Work4 and Jobscore as these are companies that build “Job” tabs for Facebook Pages.

The job posting will include the typical information such as job title, salary, full/part time. This is not much different to what companies have been doing for years, but it now has the bonus of having its landing page within the business Page. Another bonus for both business and candidate is that it will have an “Apply Now” feature and this will pre-fill with the application form with the candidate’s public information thus allow the candidates to apply for multiple jobs without repetitively typing the same information.

So what has LinkedIn got in the form of defence? Well, this is the very first stages of Facebook’s job feature, and this means certain aspects of the posting and application process isn’t as smooth as it could be. An example of this is that when an application is completed it will be sent to the businesses Page inbox, which will show in chat style, this could be difficult to view and could become hard to decipher between customer and candidate messages.

In Comparison, this is not the first time we have seen Facebook rattle the LinkedIn cage as last year they were piloting “Profile Tags” which was almost identical to LinkedIn’s endorsements. But when it comes to popularity LinkedIn is the losing network with only 414 Million users but compared to Facebook’s outstanding 1.79 Billion users. So not only has Facebook already got the advantage, it is very well known that a LinkedIn user will only visit their profile when updating it or looking for advertisements. Whereas Facebook can reach people who aren’t even thinking about a new job. Just another way Facebook are generating demand without people even realising!

How to be less of an expert?

Google plans to rank websites on facts rather than links

5 Tips to Supercharge Your PPC Campaigns