According to the Retail Gazette High street retailers are being outperformed by their digital counterparts. It’s an interesting article and one I though would be interesting to explore a little further.

High Street retailer H&M who spend significant resources on maintaining its 3300 stores across 54 countries could not match the likes of shopstyle.co.uk who dominate organic visibility.

Take a look at these stats supplied by SEMRush: 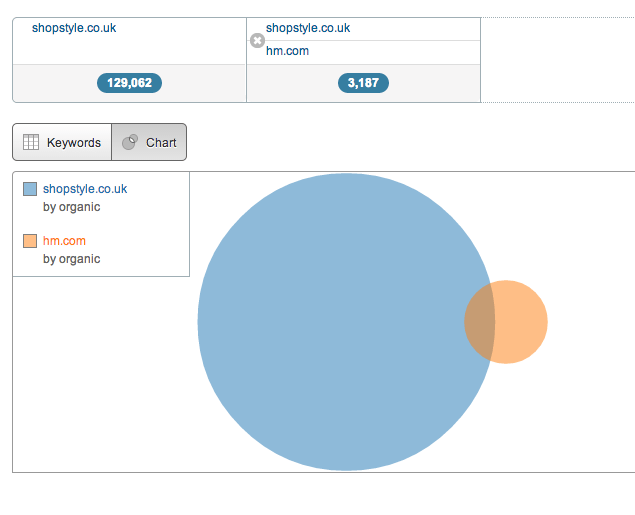 By organic keywords, Shopstyle.co.uk is dominating with H&M ranking for only a fraction of keywords that shop style is ranking for. In fact, according to SEMRush H&M rank for 3,187 keywords in their database whilst shopstyle.co.uk rank for nearly 130,000.

Established retailers are starting to wake up

I’m not just talking about the big boys here, but smaller retailers too. I regularly hear of small retailers claiming the Internet is destroying their business yet I rarely see them taking steps to do much about it.

It has taken far too long for retailers and brands to accept internet advertising / marketing and now they’re slowly realising they’ve missed the boat and are aggressively trying to catch up to the likes of shopstyle.co.uk.

Take Lenovo for example: The PC / Tablet maker is working hard to position itself as a consumer brand, how? They’re spending “a lions share of its advertising dollars on digital platforms”.

The problem is, many of them are waking up too late. Online Marketing is not a life ring: If you wait until your situation is dire then you’re probably too late: Just look at the likes of HMV and Woolworth’s.

Everyone loves a good statistic so here’ s a few retail based stats:

[Tweet “Despite 82% of luxury purchases occurring in-store, 78% of shoppers research online before buying”]

It’s hard to believe that in light of these facts there are retailers that don’t have an effective online strategy. We’re regularly seeing large established brands being caught napping as young and energetic digital competitors have embraced digital and then having to play catch up as a result.

Local firms are equally as lethargic and often see the Internet as confusing, untrustworthy and not essential for the prosperity of their business. And they’d be wrong of course:

[Tweet “37% use smartphones to look at local restaurants, pubs and bars.”]

The fact is, it doesn’t matter if you sell flowers, run a bar or you’re a plumber: People are searching online for your products and services. To quote an old advert from Google (ironically it was a newspaper advertisement)

Do you know who needs a haircut?

People searching for a haircut – Maybe that’s why ads on Google work. 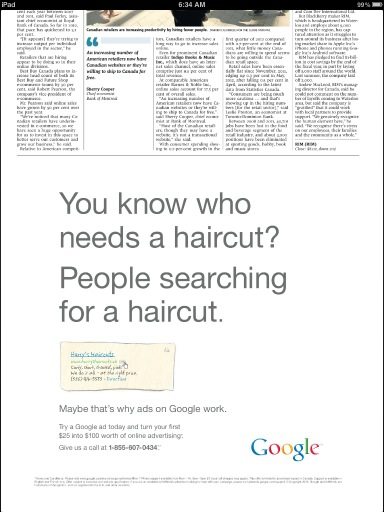 European Parliament moves to split search from Google’s other businesses